This posts tends to fix the following issues with VirtualBox Guest additions and other issues such as:

In short, this article will help you to successfully install the “Guest Addition” tools if you run Kali Linux as a “Guest” within VirtualBox. You must use version 4.2.xx or higher of VirtualBox in order to take advantage of the improvements, including compatibility updates, and enhanced stability of both the core application and the Guest Additions.

The VirtualBox Guest Additions provide proper mouse and screen integration, as well as folder sharing, with your host operating system. To install them, proceed as follows.

Start up your Kali Linux virtual machine, open a terminal window and issue the following commands.

Once done, reboot your VirtualBox to ensure you’re booting into the new kernel/updates.

After reboot, I checked my version/lsb_release to ensure I am running the latest and greatest.

Since I am running the latest version and there’s no more update pending, I went in an installed virtualbox-guest-x11 tools. This virtualbox-guest-x11 package provides the X11 guest utilities for VirtualBox. These utilities are meant to be run inside the virtual machine. They provide closer integration and improve the interactive performance.

Again, when it’s finished, I rebooted my Virtual Guest.

After reboot, my screen and shared drive worked including drag/drop and clipboard. Scroll down for step by step instructions on how to create Shared folders on VirtualBox.

Following are the exact steps you need to follow to install VirtualBox guest additions packages on Kali Linux and fix these issue.

One thing to note is that you need to have the correct repositories added before any of these would work. Once you’ve added the correct and official repositories, just update your package manager.

It’s better off doing update, upgrade and dist-upgrade before installing headers because if you’ve installed an older Kali Linux version, correct Linux headers might not be available in the repo anymore.

Install all the dependencies by running the following command:

From device menu on your VirtualBox, click on Install VirtualBox guest additions option (while you’re running Kali Linux) and you’ll see a CD/DVD drive is mounted.

Step 3: Copy and install the package 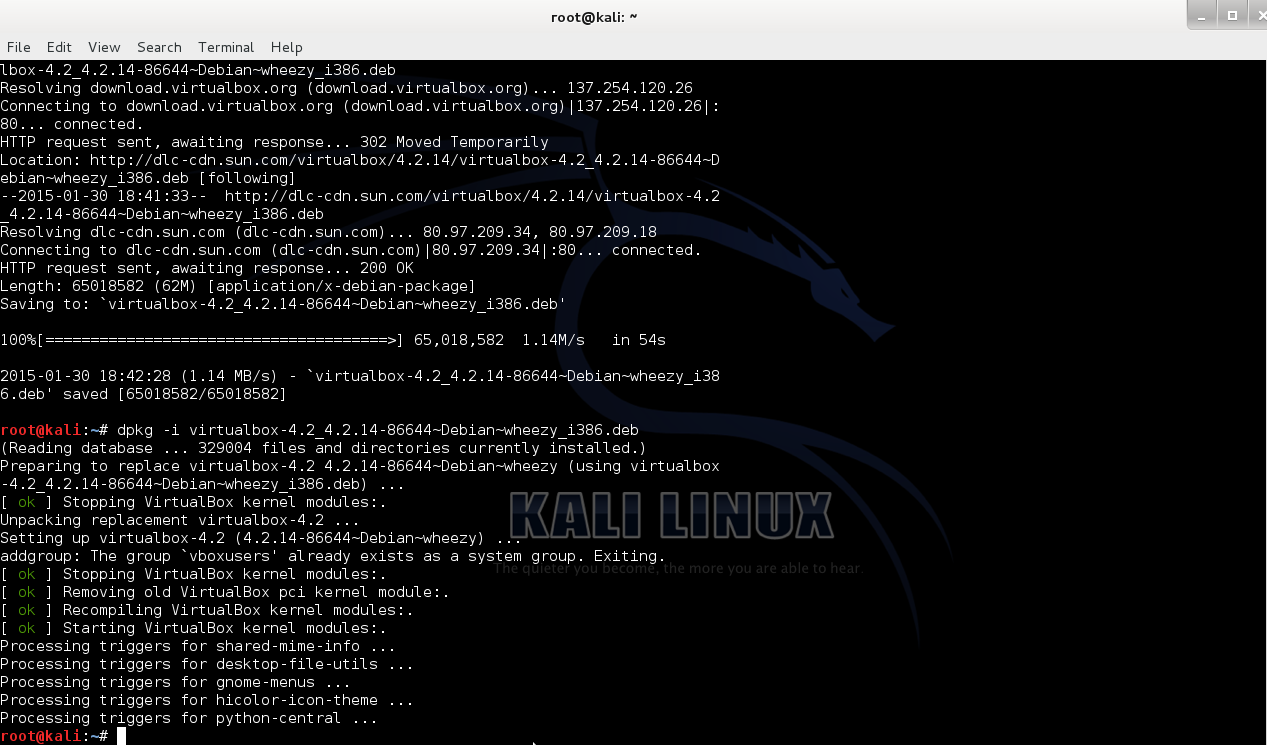 Copy the VBoxLinuxAdditions.run file from the drive to the root directory using following command

In the screenshot above, note all the …done. messages. When you see these, you know it was a successful installation.

Now you will have Kali Linux running on full screen on your VirtualBox.

From the VirtualBox Manager, select your Kali Linux VirtualBox instance and click on the ‘Shared Folders Settings’ link in the right window pane. This will launch a pop up window for adding shared folders. Within this window click the icon to add a folder.

In the Folder Path text box, provide the path to the folder you would like to share, or click the drop-down arrow to browse your host system for the path. Select the check boxes that allow for ‘Auto-mount’ and ‘Make Permanent’ and click the OK button both times when prompted.

Your shared folders will now be available in the media directory. You can create a bookmark or link for easier access to the directory.

An obvious debate to this post would be: “Why not use the official VirtualBox Guest additions?” The answer is simple, it works but not well enough and the random freezing makes your machine almost impossible to use. So we’ve decided to stick to the Open Source VirtualBox Guest Additions. Why use something that’s broken!

Thanks for reading. If you’ve found it useful, please share. Comment if you need help or discuss options.