The famous RPG series finally returns to the Nintendo party after years of absence, but Crystal Chronicles might not be the same glittering homecoming queen everybody expected. 'I think people will find the game to be quite different from all of the Final Fantasy games we've seen up until now,' explains Producer Akitoshi Kawazu. It's hard to predict how fans of the PS1 and PS2 RPGs will react--Crystal Chronicles barely resembles the 10 previous proper FF titles. Forgoing the heavy plot, sullen heroes, and turn-based combat typical of the series, Chronicles is a multiplayer action-RPG that's meant to appeal to a much wider audience.That's not to say Chronicles lacks a gripping story line, but it definitely takes a backseat to the action. At the game's outset, you (and up to three comrades) assume the roles of Crystal Caravan members Ciaron, Lu'ge, Cyadd, and Hias-- four young heroes sworn to rescue the world from diabolical smog by finding powerful magic crystals.The adventure unfolds in a series of missions across fields, cities, and dungeons, with you and your companions swinging swords and casting spells against hordes of enemies all the while. Luckily, the combat is smooth and fun--you've got three-hit weapon combos (a la Phantasy Star Online), charge-up attacks, and real-time versions of familiar FF magic spells. Puzzles appear to be on the light side (i.e., match the key to the similarly shaped lock), and climactic boss encounters await you at the end of each mission. Overall, it's simple, easy-to-pick-up stuff. 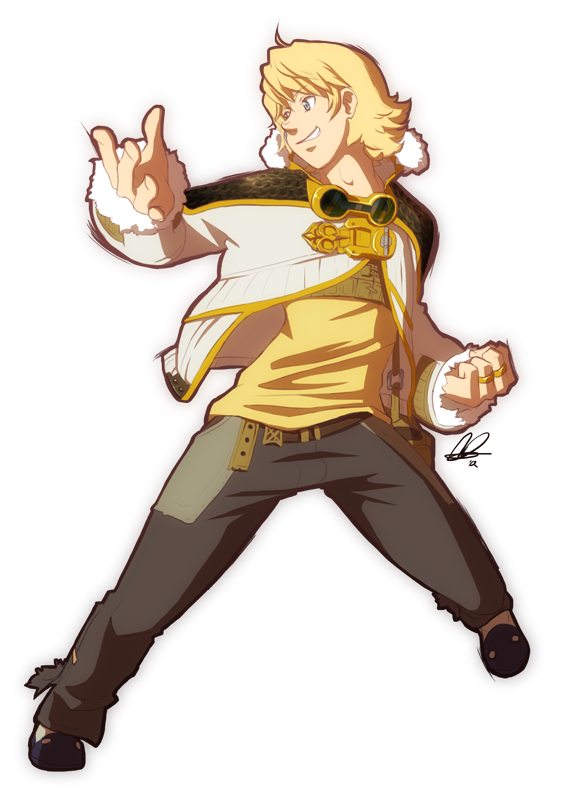 All right, I get it--this isn't like the other Final Fantasy games, but then again, I happen to like them. Even so, I really enjoyed the early build of Chronicles. It's a truly unique blend--imagine Gauntlet meets Phantasy Star Online with a chaser of Final Fantasy mythos and you're almost there. I especially dug the slick visuals, haunting music, and rewarding combat. The jury's still out on the much-vaunted GBA connectivity, though. Your pals don't have to use a GBA to play, but it does offer them a map and enhanced inventory management. Neat, but quite gimmicky, really. Final Fantasy Crystal Chronicles: The Crystal Bearers[a] is a Wiiaction-adventure game, first announced to the public at E3 in May 2006.[4] It was released on November 12, 2009 in Japan and on December 26 in North America.[2][1] The game was well received in Japan, with praise for the game's well-written story and characters, but criticizing the map system. Western reviewers however were more negative, citing that the game was less of a traditional RPG and more of an action adventure.

Unlike the GameCube predecessor, Crystal Bearers features fully real-time combat, focusing on single-player, free-roaming and action-adventure. Enemies and regular civilians can show emotion or status effects via symbols hanging over their heads, such as hearts for attraction or musical notes for satisfaction. The producers suggested that enemies can gain a wider variety of tactics and abilities. It has also been shown that some enemies have the ability to hurt fellow creatures also opposing the player. This is part of a reaction AI system, in which different creatures react in unique ways to other ones nearby and to the attacks. The player controls Layle. He can use psychokinetic gravity powers to perform different combat actions, such as moving certain enemies against their will, making them use their abilities against other enemies and utilizing various objects as projectiles. He can perform some type of reaction elements with creatures, affecting them in different manners. To further the telekinetic gameplay, he can utilize abilities to interact with the environment, such as activating switches, or grabbing ledges and other objects from a distance via an energy-based grappling hook. He can also perform such actions as moving civilians against their will. Civilians also share a trait with enemies in that they are able to attack the player when irritated by his actions. Unlike other RPG oriented Final Fantasy games, the action adventure one has the player customizing Layle's status, using accessories with materials and other items found elsewhere. The player can also increment the character's maximum HP by clearing miasma stream fights and collecting the myrrh from each areas. Exploration and free-roaming are heavily focused on the game to the point that only four out of fifteen bosses are needed to progress through the story and the rest are scattered over the world for the player to find. Based on the most recent video trailers and the general setting of the game, it also features a combat for sky diving. Quicktime events will also appear throughout the game, allowing the player to take actions with the controller during certain events, such as aiming the remote and shooting monsters in the sky. It has been commented that while most of these events are for mere enjoyment, some must be completed in order to advance the story. Other gameplay aspects as hinted at by the trailers include participation in minigames, traversing the land on chocobos (which can ram through enemies and some objects), riding on trains and swimming.

The game is set one thousand years after the events of Final Fantasy Crystal Chronicles, populated by four races.[5] During the Great War, the Yuke tribe was banished to their own world, after the crystal is destroyed by the kingdom's destructive machines called 'crystal reactors'. The new era for the imbalanced world revealed that each members of the race have the power of the crystals, calling themselves as 'Crystal Bearers', a rare breed of powerful beings with magical abilities. Their use of arcane arts defy against the law of the kingdom. In March 2008, an official advertising article about Final Fantasy Crystal Chronicles: Ring of Fates noted that the Nintendo DS installment is set before The Crystal Bearers.[6]

The main protagonist is Layle, a Clavat mercenary and one of the four eponymous 'Crystal Bearers'. His crystal is located on a right cheek. His Selkie partner, Keiss, becomes a military colonel of the kingdom. Belle, a female Selkie, helping them solve the case. Amidatelion (also known as Goldenrod), a female Yuke summoner and one of the bearers, whose goal is revive the race and the 'Crystal Principle' to restore the crystal. Althea Sol Alfiraria, an orphaned princess of the Lilty Kingdom and one of the bearers, whose crystal is located on her chest. Cid, Layle's former engineer and tinker of the Lilty Kingdom. The main villain is Jegran, the kingdom's high commander and one of the bearers. After the accident caused the power of the crystal reactor to replace his arm, he uses it to turn anyone into red crystal statues and harm the principle. Jegran plans to conquer the world, using a god complex. Other characters include Vaigali, the leader of Selkie Guild, selling information for highest bidders and Blaze, Layle's pyrokinetic ex-partner.

Layle arrives at the 'Alexis II' and meets Amidatelion, who uses one of the 'Crystal Idol' pieces to absorb the energy from the ship.[7] Layle takes the Idol and drives the ship to safety near the capital. After evading the guards, Layle, Belle and Keiss head to the ancient ruins through the cave, where they discover Amidatelion using the idol to revive the parts of the crystal. After leaving the cave, Layle continues to investigate the case. When Jegran frames Layle, the fugitive saves Amidatelion and they head to the city through the portal. There, Amidatelion suggests Layle to work together, in order to stop Jegran and save the crystal. Back in the human world, Layle goes to the 'Alexis I' battleship and learns that Jegran turned Althea's father into a crystal statue. While Layle, Amidatelion, Belle and Keiss rescue the rest of all prisoners, Jegran kills Vaigali. After leaving the airship, Layle returns to the chamber room and uses the Idol to recover another part of the crystal, before Jegran kills Amidatelion. Althea's military troops detain Jegran for betraying the race, and Layle is pardoned from the crime. Before Layle and Keiss head to the palace, Jegran uses his power to activate his battleship and kidnaps Althea. With the reactors disabled, Layle saves Althea and confronts Jegran. With the help of the Yuke tribe, Althea manages to save the Lilty crystal. After Layle destroys Jegran and his ship, he ends up surviving and leaving the world through the ocean. With the crystal and the world restored, Althea invites the tribe to unite the race.

The Crystal Bearers is intended to be a more 'single-player experience', as opposed to the GameCube installment which focused on cooperative play.[8] Toshiyuki Itahana stated he wants a more 'world weary' protagonist, and wanted him to seem rugged, which influenced the hair design of the character.[9] The game is intended to feature a more 'mature' design to help bolster the heroic structure of the story.[8] Itahana wanted to make 'an exhilarating tale of this great hero set against sweeping blue skies', which influenced many decisions in game design and story.[9] The game's existence was announced at E3 2005[10] and at E3 2006 a short pre-rendered teaser trailer was included within a Wii games compilation video. In May 2007 a new trailer including gameplay was released and a few interviews with the developers were given.[11][12] Since then, no game information was given. Crystal Bearers has had no presence at recent Square Enix events or the website (the Crystal Chronicles developer blog has not made mention of Crystal Bearers since June 6, 2007[13]) coupled with the developers of Final Fantasy Crystal Chronicles: My Life as a King refusing to comment when asked about the status of The Crystal Bearers at the Game Developers Conference of February 2008, stating only that the public should 'wait for a press release.'[14] In November 2008, in response to a section in the next month's issue of Electronic Gaming Monthly stating that the game had been 'quietly canceled' Square Enix released a statement confirming that the game had not been canceled and that they fully intend to release it, although no release date could be given.[15] A trailer for the game was packaged with the Wii version of Final Fantasy Crystal Chronicles: Echoes of Time. It shows the game in a further state of development, and displays game characteristics such as combat, magic, puzzle solving and an overworld, as well as traditional elements of the Final Fantasy series, such as the Cactuar and Bahamut. At the end of March, an official teaser site opened up.[16] In Japan, a commercial for the game aired with the song We Weren't Born to Follow by Bon Jovi playing in the background.[17]

On its first day of release in Japan, The Crystal Bearers sold 26,000 units, which is about 34% of its initial shipment in the region.[24] The Japanese version sold 43,705 units by its second week of release,[25] and over 54,000 copies by the end of the year.[26] The game was praised by Weekly Famitsu, saying the game's plot elements were well done: one reviewer stated 'The way the story develops, along with the unique characters and world setting, is brilliant. There are lots of little details to everything.' However, the publication criticized the game's map, finding it difficult to pinpoint the player's location with respect to the surroundings.[19]

The game received mixed and generally less favorable reviews from western outlets. X-Play gave a negative review, while Game Informer and IGN faulted the game for being an action adventure rather than an RPG. However, GameTrailers and Nintendo Power reviewed the game more positively.