'Pick Up the Phone' (stylized as 'pick up the phone' on Birds in the Trap Sing McKnight) is a song by American hip hop recording artists Young Thug and Travis Scott. It was released on June 3, 2016, by Grand Hustle Records, Epic Records, Atlantic Records and 300 Entertainment.[1] It is the lead single from Young Thug's mixtapeJeffery (2016) and Travis Scott's second studio albumBirds in the Trap Sing McKnight (2016). The song features vocals from Atlanta rapper Quavo from the hip hop trio Migos and additional vocals from American singer-songwriter Starrah.[2]

Young Thug first previewed the song in a snippet that he posted on his Instagram account in March 2016.[3] The song was originally a collaboration between Young Thug and Starrah. Starrah sang the hook instead of Travis.[4] Travis was in the studio when Thug recorded the song, and he wrote the bridge Young Thug sings. About a month later, Travis started playing the song in clubs, but instead of Starrah on the hook, Travis replaced her, and he had his own verse too. He also called the song his own single for his own album without notifying Young Thug of his involvement. Travis kept teasing the song for months before he finally leaked it on his own SoundCloud because the labels would not release it. After Travis called his manager Lyor Cohen, who also owns 300 Entertainment, Thug's record label, an agreement was made that the song would be released on iTunes later that day as a joint single between Thug and Travis.

'Pick Up the Phone' debuted at number 90 on Billboard Hot 100 for the chart dated for the week of September 3, 2016.[5] The song eventually peaked at number 43, becoming Travis Scott's third highest charting song as a lead artist and fourth overall on the chart. The song was certified double platinum by the Recording Industry Association of America (RIAA) in May 2017, for selling over two million digital copies in the United States.

The music video premiered on August 12, 2016 with the music video for '90210' at the '.wav party' in Los Angeles, California, with both of them later released on Travis Scott's Vevo account on YouTube.[6][7] 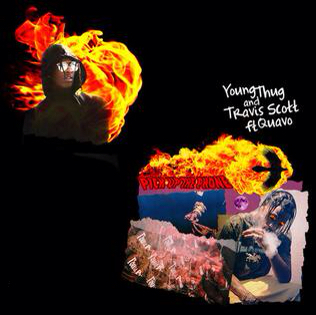